A Crystalline Elemental Dragon of Alchemy;
Its skin is encrusted with rough cut stones; small, round and multi facetted, spiralling in circular patterns of all the shades of blues, greens, silvers and golds we saw in the Bahamas; from milky turquoise to dark sapphire cobalt, from aquamarine green to deep jade. These stones sparkle and shift in intensity according to the environment she’s in; be it water, snow, rain, lightening, bright white morning light or velvety darkness. A palette of iridescent living radiance that burns differently with each tiny movement of anything – such is the coat of the elusive dragon …. 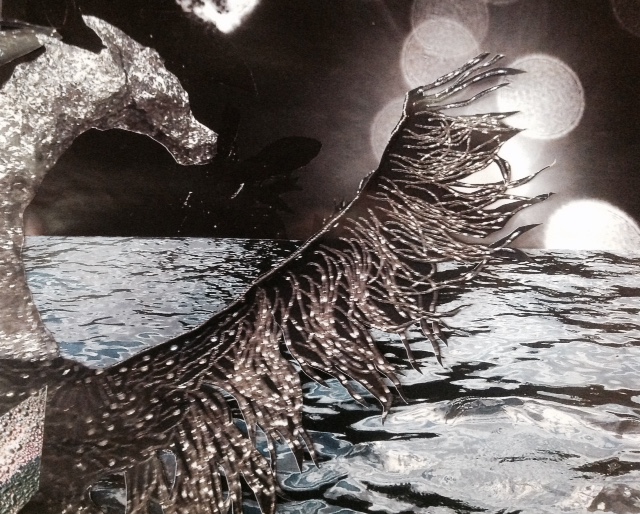 The Way of Water
The spines that protrude from its neck are long slim talons of light, that spray infinitely fine wisps of liquid light from their sharp ends when they are erect. Between each spine, a most delicate weave of miniscule silver thread, forms an intricate web of geometric design, most easily perceived in the early morning sunlight, and at dusk … Sometimes minute drops of dew cling to the strands and act as lenses, and one can glimpse the ordering forces of the universe in the perfect golden mean based asymmetry.

Two twisted spires of clear quartz horn from a delicate visage. They are both long and unimaginably sharp. They capture solar and cosmic information which powers and ignites the crystal brain beneath. The eyes are diamond shaped and multifaceted, like cut glass. They exude such immense light that the colours of her convex lenses are rendered as deiglo pinks, lime greens and brilliant light yellow. They’re too bright to look at for more than half a second. Often the eyes are half shut, only allowing the lower V of her smouldering gaze; visible. Its sultry ears are long, narrow and graceful; always alert and clad in tiny diamante spiralled patterns and shades of tanzanite.

Its tail is extremely long and sometimes she curls it up as a seahorse would. The end of it splits, and at a certain angle, may resemble a miniature whale tale.

Great wings it grows at will, and are made of the same liquid light substance found in the spines of its thorny mane, yet the fabric of the thread between is so tightly woven, that the wings appear solid and mercurial in texture. When in flight we see ripples of light shapes running across the wings as one would identify on rivers and streams. A strong smell of irons exude along its flight path.

In the rain, water droplets collect between the facets of its rocky skin, and solidify. When it shakes itself dry, they fly off in all directions and lie as tiny stars upon the earth. These diamonds are known as alchemical diamonds in contrast to e.g. alluvial diamonds found in river beds.

The underside of the dragon, from beneath the chin to the tip of the tail is soft and silky, translucent; a transparent mother of pearl colour. If close up one can see the workings of fire and light intermingle in various tones of fiery copper. When the blazing of the fires calm, a rose quartz heart can be detected; pulsating coolly and rhythmically within.

Silver and black smoke puffs from alert nostrils at intervals. Evidence of the transformatory process within. Occasionally shards of copper tongues, fly from its mouth. Teeth of the same quartz material as its two horns, detect and decipher very high frequency sound, that is pitched almost at the sound of light. The language between the 7th and 8th dimensions. Between energy and matter. Crystallia is powered off light information only, absorbed through its vibrant dappled crust, and two spired antennae.

And water …. how it loves to drink cool clear water.

It has one living companion that was befriended long ago; a great white eagle angel, that lives imperceivably high up in the vacant snow dusted mountain tops. A feathered nest of deep white plumage holds the two of them cosily. The dragon warms the abode with its inner fire, and sometimes the two of them sleep centuries away. In this dream state they enter raindrops, and plummet to earth in fast falling, sometimes frozen prisms of light refracted. They’re swirled by the winds, and often dashed by great waves. Sometimes they find themselves in the quietest fathomless black recesses of mother earth, eternally still. A favourite is to be sucked up the giant trunks of the baobab or yellowwood trees of Africa.

The elemental loves to drape itself across the freezing icebergs of the Antarctica and dive to the depths of the oceans and then hurtle up to and beyond the ozone of our blue earth. It also loves snoozing for hours on the motion of the surface of the sea. Often its been seen spiralling around the whales and swimming in perfect harmony with the dolphins, in their sewing motion in and out of the surface of the water. And at times it glides into the earth where it swishes around the hypnotic magnetic iron core, for years at a time. Stirring up the sleepy bowels of the planet. This is a meeting place where other dragons of the galaxy and far off solar systems; converge, swim, dance, chase and merge.

But one dragon only is ever seen on the surface of its own domain. The planet of its choice and ultimate co creation. It remains loyal until the body returns to its star status, releasing the dragon back to the void of the central sun of its origin.